In Best Women’s Erotica of the Year, Volume 5, award-winning editor Rachel Kramer Bussel takes readers on an outrageous
journey into the world of female fantasy and desire. These sexy stories offer up wild, hot and steamy tales from today’s top
authors. You’ll be swept away by the sexiest business deal ever, break the rules in a future world where skin on skin contact
is forbidden, and discover the art of getting off by phone sex.

From threesomes to mermaid sex, fetishes, sex parties and much more, these authors steam up the pages with tales of
trysts, love, and lust where nothing is held back. If you’re looking to escape from the everyday and discover what happens
when women are ready to get totally outrageous, this book is for you.

With new stories by beloved authors including Joanna Angel, Balli Kaur Jaswal, CD Reiss, Sierra Simone, and Sabrina Sol,
along with newcomers to the genre, you’ll savor every sizzling page.

Press
"In this anthology there are stories for everyone. There are slow burns and there are quick sexual connections. If you enjoy erotica or are looking for something a bit steamier in your romantic readings this anthology is something that you should make sure to check out." --Nerdy Girl Express

"Once again, Best Women's Erotica of the Year brings the heat, tension, love, lust, and emotion. The stories are varied and yes, outrageous, in the very best way. Go over the top with this steamy read!" —Megan Hart, NYT bestselling author of Flying

"Enticing, adventurous, and full of surprises, this book will knock your metaphorical socks off – and, quite possibly, everything else." —August McLaughlin, host and creator of Girl Boner® podcast

“Rachel Kramer Bussel did it again! And her fifth collection of naughty tales may be the most provocative yet – they’re seductive, spicy, and deliciously scandalous. Each naughty adventure dazzles and sizzles with sexy good fun!" —Autumn Bardot, author of Legends of Lust and Confessions of a Sheba Queen

"The collection shows off a variety of writing styles and fantasies. Readers will find inspiration to warm their hearts (and other parts). A splendid blend of quotidian eroticism and fantastical filth.”—Allison Moon, sex educator, author, Girl Sex 101

Both Marq and Brady looked just as unhappy flipping through the deal memo as Jake, but they had the good sense
not to challenge her just yet. Jake had always been the impetuous one, the one full of temper and impatience, but
Marq was the CFO of their company and dealt solely in practicalities and pragmatics, as did Brady, their COO. They
both now gazed at her with distinct wariness as Jake tossed the memo on the coffee table in front of their armchairs.

“We can’t do this,” said the CEO. His voice was flat and edged with cold fury. “You know we can’t. The shareholders
wouldn’t allow it. Being bought and stripped off for parts would be better.”

“Hmm,” Sarah said, pretending to take this under consideration for the first time. Marq’s wariness seemed to sharpen
into suspicion as he watched her straighten and walk around her desk. She opened a drawer and removed another
sheaf of papers.

“I do have another offer,” she said. “However, it is very unconventional,
so I understand if you’d rather just leave.”

But they wouldn’t leave, Sarah knew, and they didn’t. Jake’s face was no less furious when she passed out the new
memos, but she could see the desperation behind the fury. Their company was failing, and hers was thriving. They
had a bankruptcy lawyer on retainer, and they’d knocked on every door there was that wasn’t hers . . . and they were
out of any options that left them both the company and their pride.

So they’d surrendered their pride and come to her, just as she’d known they would. And she would have a lot more
than their pride by the time they were finished.

She had to admit to herself that it was more thrilling than she’d dreamed to watch their expressions as they read the
new memo. She nearly laughed when Brady looked up at her with stunned incredulity, and then his eyes dipped back
down to her hemline. They had always liked the way she looked, even when she was an intern working for them, and
it had been so exciting to feel their eyes on her back then.

It was even better now.


About the Editor
Rachel Kramer Bussel (rachelkramerbussel.com) is a New Jersey–based author, editor, blogger, and writing instructor. She has edited over sixty books of erotica, including Best Women’s Erotica of the Year, Volumes 1, 2, 3, 4 and 5; Best Bondage Erotica of the Year, Volume 1; Dirty Dates; Come Again: Sex Toy Erotica; The Big Book of Orgasms; The Big Book of Submission Volumes 1 and 2; Lust in Latex; Anything for You; Baby Got Back: Anal Erotica; Suite Encounters; Gotta Have It; Women in Lust; Surrender; Orgasmic; Cheeky Spanking Stories; Bottoms Up; Spanked; Fast Girls; Going Down; Tasting Him; Tasting Her; Please, Sir; Please, Ma’am; He’s on Top; She’s on Top; and Crossdressing. Her anthologies have won eight IPPY (Independent Publisher) Awards, and The Big Book of Submission, Volume 2, Dirty Dates and Surrender won the National Leather Association Samois Anthology Award.

Win one of 3 physical copies of Best Women's Erotica of the Year, Volume 5.
CLICK HERE TO ENTER 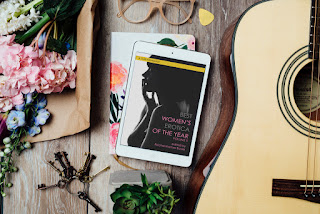