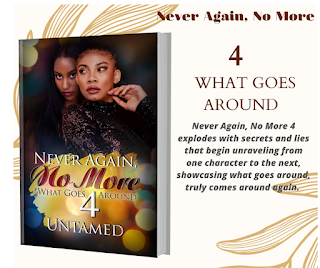 Never Again, No More 4 explodes with secrets and lies that begin unraveling from one character to the next, showcasing what goes around, truly comes around again.As Pooch works tirelessly to realign the Dope Boy Clique from prison, Trinity and Terrence seem to be falling apart at the seams. Trinity wonders if Terrence is truly the man she thought he was, and Terrence begins to question Trinity's actions around those closest to him. Although they love each other, are they right for each other? Unknowingly, they must brace themselves for the wrath of Pooch.Life has moved on for LaMeka. She has the career and the new man she's always wanted. Gavin is playing for keeps, but Tony is alive and well. With a new lease on life, he wants his family back and will do whatever it takes to remove Gavin from the picture.Lucinda struggles to adapt to the new normal of her stepdaughter, Jessica, and Aldris' ex-fiancée, Jennifer. Admittedly, Aldris doesn't make the transition easy, and as Jennifer and Aldris get close again, it causes a rift between Lucinda and Aldris. When Lucinda finds solace in an unexpected friend, Aldris is left struggling to keep his blended family together.After Lincoln shows up and wreaks havoc for Charice and Ryan, it's Ryan who's left having to correct his errors to make his wife happy again. However, the secret they are withholding about the paternity of their baby may be the one thing that rips this perfect union to shreds.
Review
Well, I have to say that coming into the series via book 4 was a drama-filled good ride. I came into this series in book 4 and am now going to go back and get the backstory. Author Untamed created characters that were completely relatable. She had my anxiety on level orange with the knowledge of Tony being alive, just as much as she had me wanting to drink a bottle -yes a bottle- of Moscato with Lucinda's situation. Step-parents don't have it easy. The drama with Charice was so good. I could feel the anger during the revelation with Lincoln. I agreed with him. The audacity to have Ryan...Okay, I'm not going to give it away. I need you to read this story so we can talk about it lol.
The novel moved quickly and was an emotional rollercoaster. I can't wait to go back and listen to books one through three. That being said, even with not having listened to or read the other installments, I really didn't feel like I missed too much. She did a great job of giving a recap. This read like a tv series. Untamed delivered a 5star installment to this series. I would recommend this to anyone who likes drama with their wine. I received an ARC and I'm so glad that I did. I don't want this to be the end.
Purchase Links 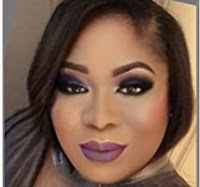 Author and poet, Untamed brings about enlightenment and amusement through real-life, everyday stories with resonating characters. This Cum Laude graduate of UMUC attributes her passion for the literary arts to her magnet school educational background. Her unique style of writing landed her awards such as Coca-Cola Young Writers Award and UBAWA's Top 100 Authors 2018. Her creative talents afforded opportunities with SWAG Magazine, Boss Magnet Media, and a multi-book deal with Urban Books. As an expert movie quoter with a hankering for the 90s, Untamed resides in Georgia and relishes family time with her husband and children. She continues to push the creative envelope--delivering content that is unapologetically real and undeniably untamed.

Find her on all social media at Author Untamed