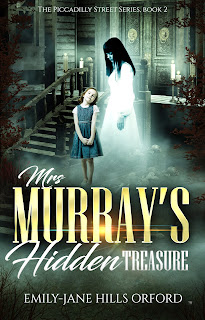 Once the house settled down for the night, Mrs. Murray, the resident ghost, was out on her nocturnal prowl. Satisfied that the house was safe and secure for the night, after all the musical vibrations that shook the rafters earlier, she took her place at the end of Mary’s bed and waited patiently for the girl to stir from her sleep and take note of her presence.

“What?” Mary groaned, pulling her eyes open as she emerged from a deep sleep. “What now?”

“We need to talk.” The wispy figure of what was once a very distinguished-looking lady, sat down at the end of Mary’s bed and looked the girl firmly in the eye.

“What difference does it make? Sit up and let’s talk.” The ghost was not going to take ‘no’ for an answer. And, it would appear, feigning sleep would not send her away either. So, Mary pushed herself into a sitting position and rubbed her eyes again, hoping to eradicate the sleep that threatened to make them close.

“Where are the others? Where’s Brunny?” she asked.

“Asleep in their little space. And it’s not a natural sleep either. They’re all in the deepest of sleeps, all except Elizabeth, who slipped out of the house a few hours ago, just after the lights went out and your family snuggled in for the night.” Mrs. Murray slid a little closer to Mary. “She’s still not right, that Elizabeth. She’s good and well shackled by that witch.” 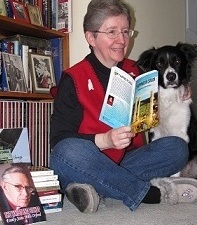 An avid gardener, artist, musician and writer, Emily-Jane Hills Orford has fond memories and lots of stories that evolved from a childhood growing up in a haunted Victorian mansion. Told she had a ‘vivid imagination’, the author used this talent to create stories in her head to pass tedious hours while sick, waiting in a doctor’s office, listening to a teacher drone on about something she already knew or enduring the long, stuffy family car rides. The author lived her stories in her head, allowing her imagination to lead her into a different world, one of her own making. As the author grew up, these stories, imaginings and fantasies took to the written form and, over the years, she developed a reputation for telling a good story. Emily-Jane can now boast that she is an award-winning author of several books, including Mrs. Murray’s Ghost (Telltale Publishing 2018), Mrs. Murray’s Hidden Treasure (Telltale Publishing 2019), Queen Mary’s Daughter (Clean Reads 2018), Gerlinda (CFA 2016) which received an Honorable Mention in the 2016 Readers’ Favorite Book Awards, To Be a Duke (CFA 2014) which was named Finalist and Silver Medalist in the 2015 Next Generation Indie Book Awards and received an Honorable Mention in the 2015 Readers’ Favorite Book Awards and several other books. A retired teacher of music and creative writing, she writes about the extra-ordinary in life and the fantasies of dreams combined with memories. For more information on the author, check out her website at http://emilyjanebooks.ca

Connect with the Author

Book Review
This was my first read by this author. I was not sure that I would be able to keep up with the story as it was the second one in the series.  However, the author did a good job of providing enough of a recap that I don't feel I missed anything. I liked that the author took great care in pulling me in as a reader, even though, this is a "middle school" fantasy read. I wondered was this her house growing up that was used as the homestead in the story.  She described it with such vivid detail that it almost felt like a character of its own.  I also found Mary to be as likable as the villain. ( I know. I know, but I love a good villain).
I think pre-teens are going to enjoy the supernatural elements, coupled with the mystery and the battle between good and evil. I would absolutely recommend this read.
Note: I received this book in exchange for my honest review.

Emily-Jane Hills Orford will be awarding a $10 Amazon/BN GC to a randomly drawn winner via rafflecopter during the tour.