My Not So Wicked Stepbrother Audiobook Blog Tour & Review

"Wickedly charming, flirty, and clever. This is the ultimate friends to lovers story. I loved it!" (Becky Monson, number-one best-selling author of the Spinster series) "You'll want to crawl between the covers of this book and never leave." (Whitney Dineen, number-one best-selling author of Relatively Normal) Loveless is more than a name, it's a curse. I, Emma Loveless, have a destiny. It's not the greatest of destinies, but when you have a name like Loveless, what can you do? I'm cursed to always be the friend, never the girlfriend. Unless you count my love affair with Duncan Hines, Dr. Pepper, and the ever-lovable Pillsbury Doughboy. They've seen me through it all, but a girl needs more than refined sugar to curl up to every night. It doesn't help that I have a meddling, albeit wonderful, mother who can't help playing matchmaker. Thanks to her, I can say I've been on a date with a felon. Now she swears she's found the one for me, her new optometrist, Dr. Sawyer King. Meanwhile, I'm preparing for the inevitable restraining order. That is, until I meet the sexy doctor and have to admit my mother is right - love at first sight does exist. Unfortunately, my last name means business. Not only do I find myself in the friend zone, but also the twilight zone. Only in my world would Mr. Right turn into my stepbrother. To top it off, he brings with him a wicked stepmother who will do anything to keep us apart. Despite all this my heart - or is that my mom? - keeps telling me Sawyer is the one. But what if true love isn't strong enough to interfere with my destiny? It'll be me and the Doughboy...for eternity.

Jennifer Peel is the award-winning bestselling author of the My Not So Wicked and More Than a Wife series, as well as several other contemporary romances. Though she lives and breathes writing, her first love is her family. She is the mother of three amazing kiddos and has recently added the title of mother-in-law, with the addition of two terrific sons-in-law. She's been married to her best friend and partner in crime for a lot longer than seems possible. Some of her favorite things are late night talks, beach vacations, the mountains, pink bubble gum ice cream, tours of model homes, and Southern living. She can frequently be found with her laptop on, fingers typing away, indulging in chocolate milk, and writing out the stories that are constantly swirling through her head.

Melissa Moran is a former radio personality who has won both a CMA (Country Music Association) and ACM (Academy of Country Music) award for broadcasting. In addition to commercial voice-over work, theater, on-camera roles, and improvisational comedy, Melissa has narrated over 175 audiobooks in many different genres. Originally from Massachusetts, Melissa traded in her winter coat for flip flops and now resides in sunny Florida.

How would you feel if your soulmate ended up being your stepsibling? Thanks to her mother who played matchmaker, she reconnects with a former teammate. Young Emma was a football kicker, tomboy, belching girl and he was, Sawyer,  Mr. All-American quarterback. Both now adults in their respective careers connect in an extended catch-up phone call and date. Fast forward, a year later and everything has changed. Emma's mother has died and her father has remarried to none other than Sawyer's mother, who makes Cruella seem like the nice sister.
The author did a good job of developing the characters and providing a not so typical journey to love and happiness. As expected, there was a quite a bit of angst and I wanted to say "get out of your head" and just ask questions. During these moments, the story lulled a little bit for me. I did like Emma and Sawyer, even though there was nothing wicked about him.  The cast of supporting characters added a nice layer of humor, betrayal, and villainy to the novel.  They provided the texture to the story.
The narrator was spot on and did a great job of bringing the characters life. The story moved well minus the few lulls and the production was flawless.  I look forward to seeing what's next in the series.
(I received this audiobook as part of my participation in a blog tour with Audiobookworm Promotions. The tour is being sponsored by Jennifer Peel. The gifting of this audiobook did not affect my opinion of it.) 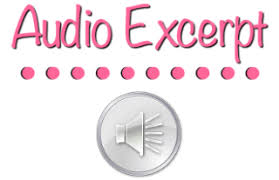 Aug. 10th: Momma Says To Read or Not to Read

From the TBR Pile

Reading for the Love of Books

Plugging you into the audio community since 2016.
Sign up as a tour host here.