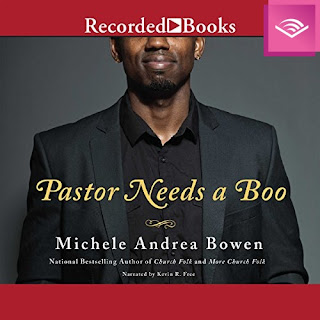 Pastor Needs a Boo by Michele Andrea Bowen
My rating: 2 of 5 stars

Michele Andrea Bowen made a name for herself years ago during the African-American inspirational fiction craze. Now, in Pastor Needs a Boo, she's back with an amazing journey of faith, drama, and love.
It was a regular New Jerusalem Gospel United Church work day for Reverend Denzelle Flowers when Veronica Washington, Keisha Jackson, and Marsha Metcalf showed up after losing their jobs on the same day, same morning, and almost at the same time. Denzelle struggled to solve that first problem. The other problem—the lovely Marsha—would be much harder to solve. Denzelle didn't even know how to fight wanting to turn in the playah's card and getting "booed" up with the poster girl for "church girls."
Marsha Metcalf and her fellow unemployed church members aren't Denzelle's biggest problem, though. He is running for bishop, and his enemies—a more ruthless consortium of corrupted clergy—want power badly enough to go to rather extreme lengths for it because the stakes are just that high. Now, his ex-wife was back and sleeping with the enemy, digging for dirt. Reverend Denzelle can't fight this battle alone. This pastor needs a ‘boo' who will stand by his side. Before the dust settles, both Marsha and Denzelle's faith and love will be put to the ultimate test.


Book Review
(Note: This review is a little different than the others. My comments were delivered as I listened.)

The story is quite slow, filled with unnecessary details that don't add anything to the story. The level of "romantic" angst was more than I would find in a young adult story. It bordered on the ridiculous.  There are 4 characters that are actually interesting but are relegated to being bit players in the story and that's a shame. They really could have given this story the kick in the pants it needs. The narrator is fine as long as he's speaking in his normal voice or a male characters' voice. He was not quite right for any of the women.

I'm 23 chapters in and it's been a rough listen.

I'm at chapter 36-And the more I listen, the more juvenile these "adult" characters are written. Denzel's a player? There's no evidence of that other than him constantly calling Marsha "girl"
Marsha is a "chaste" woman, which in this book means she simple, silly and frigid. This book is extremely wordy.

the narration for each character was tolerable only for a handful of characters. The others were narrated with an extremely heavy nasally, slow, country twang that bordered on the hilarious. There are only 4 chapters left and I hope this story at least gives its readers something...anything. Although that's a lot to ask for in such a short amount of time. I'm still waiting for what is going to "test" the faith and love of Denzel and Marsha, who finally admitted their mutual love for each other after 36 painfully angst-filled chapters. I can only imagine that this was set in the 70s with the type of "playa" verbiage that was used. Well, I thought that until I heard references of Shalamar and Orange Juice Jones. That still didn't help the thought I had whenever the Pastor tried to sweet talk. It simply came across creepy as heck. Picture Bishop Don Juan or Superfly trying to sweet talk a girl. At this point, I think the church should have been the focal point with the parishioners and their antics secondary.

Okay on to chapter 37-It didn't pick up. I see there's a book 2 coming out in 2020. Unless the writing style and the story is less wordy and actually is filled with action between or by the characters, I can't say I will listen to the next installment. I couldn't get invested in any of the characters or their outcome. This was not for me
View all my reviews