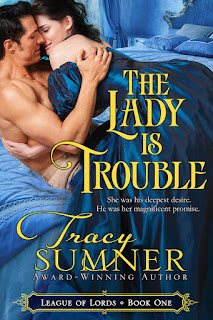 The Lady Is Trouble by Tracy Sumner
Series: League of Lords, Book 1

Synopsis for The Lady Is Trouble:

In the first of Tracy Sumner’s sizzling League of Lords historical series, mysticism in Victorian England is the setting for a captivating love affair . . .

He’s a viscount with a dark past who yearns for the one woman he can’t have. She’s rebellious, spurned by society and determined to change his mind.

What’s a rebellious woman to do when the man she’s meant for doesn’t believe in love?

After three years of waiting for Julian Alexander to realize they are destined to be together, Lady Piper Scott takes matters into her own hands. Because her gift as a healer has never done anything but distance her from the most principled man in England. A meaningless diversion as a medium, all done to gain a certain wandering viscount’s attention, backfires. As most endeavors have for a woman known in the ton as Scandalous Scott.

Julian Alexander, Lord Beauchamp, battled his way from the lowliest slum to assume his title. He carries not only a turbulent past, but a mystical psychic gift that separates him from society. Honorable to his core, he is committed to protecting a community of outcasts with abilities like his own. He has no time, no place, for love. Or repeatedly rescuing the most outrageous, beguiling woman he’s ever known. Even if she needs his protection most—and he desires her above all others.

Seduction, intrigue and desire lead to an explosive passion…

Julian vowed to shield Piper from the deadly foes seeking to possess her powerful gift. Although he needs her help in controlling his own, the mix could be deadly. Soon what was once a simple agreement to work together becomes enchantingly complex as they surrender to a timeless love…

“Delicious and amusing…witty dialogue, sparkling humor and a snappy narrative. A must read!”
—The Best Reviews

“Terrific dialogue…and hot loves scenes. If you haven’t read Tracy Sumner before, Tides of Passion is a good place to start.”
—All About Romance

“A powerful relationship novel that explores the heartache and triumph of love.”
—Romantic Times

“The battle of the sexes heats up the pages of this fun and fresh romance by talented new writer Tracy Sumner.”
—New York Times bestselling author Susan Wiggs

Also by Tracy:
Tides of Love
Tides of Passion
Tides of Desire
To Desire a Scoundrel
To Seduce a Rogue 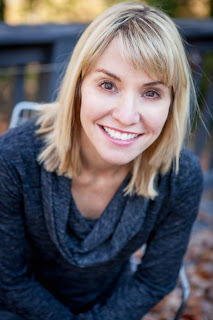 Tracy's storytelling career began when she picked up a copy of LaVyrle Spencer's Vows on a college beach trip. A journalism degree and a thousand romance novels later, she decided to try her hand at writing a southern version of the perfect love story. With a great deal of luck and more than a bit of perseverance, she sold her first novel to Kensington Publishing.

When not writing sensual stories featuring complex characters and lush settings, Tracy can be found reading romance, snowboarding, watching college football and figuring out how she can get to 100 countries before she kicks (which is a more difficult endeavor than it used to be with her eleven-year-old son in tow). She lives in the deep south, but after spending a few years in NYC, considers herself a New Yorker at heart.

Tracy has been awarded the National Reader's Choice, the Write Touch and the Beacon - with finalist nominations in the HOLT Medallion, Heart of Romance, Rising Stars and Reader's Choice. Her books have been translated into German, Dutch, Portuguese and Spanish. She loves hearing from readers about why she tends to pit her hero and heroine against each other and that great novel she simply must order in five seconds on her Kindle.

Giveaway:
Win one of 10 ebook-copies of The Lady Is Trouble by Tracy Sumner