It's a Cover Reveal! Mischief Island by Daneal Brown

This ad in the daily newspaper was all it took for two couples to go on a vacation of a lifetime.

“Time away from the hustle and bustle of the everyday grind can always bring two hearts back to one.” - Whit Lafleur

The McDonald’s and The Lafluer’s seem to have it all -- a loving relationship, a wonderful home, and some awesome friends, that is always there for them no matter what. Lauren, the ambitious beauty, worked hard at her job, always bringing work home, trying to be recognized as more than just a pretty face. Unknowingly she was neglecting her husband Leroy in the bedroom and it began pushing him towards a young beauty at his job. With Whit working more overtime than he’s ever worked in their twenty-plus years of marriage to his loving wife Suzanne the spontaneity in their sex life was slowly fading away. With a headline like “Insane O _ _ _ _ _ S,” how could the feisty buxom blonde Suzanne, pass up this opportunity, no matter how tasteless Lauren thought it was, she had to see what it was all about.

After an intense morning workout and a regular day at the office, Suzanne and Lauren went to one of their favorite eateries for lunch. Before their food could hit the table, Suzanne had already made the call and gave some mysterious woman all of their business. Now all they had to do was convince their husbands. Join Suzanne and her best friend Lauryn as they pull their husbands into a wild adventure on an island where love reigns supreme, but mischief rules. The couples let their hair down and find multiple ways to strengthen their relationships with drinking, dancing, romance, and oranges?

From the creative mind of Daneal Brown Mischief Island, will display and test friendship, love, and marriage in this spicy romance novel.

Mischief Island will be the second release from the author. The author wanted to create material that allowed readers to escape for a few hours and maybe have some of their passions sparked by the written word. Not until he started working on Juice Box did that vision really come to fruition.
Be sure to connect with the author to stay up to date on the release of Mischief Island and to receive exclusive content and sneak peeks.
You don't want to miss it!
Connect with the Author 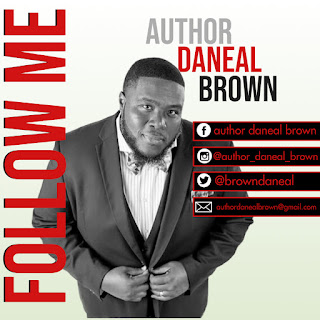