Obsessive Intoxication: A Twisted Tale of Impulsive Desire and Love's Dark Side 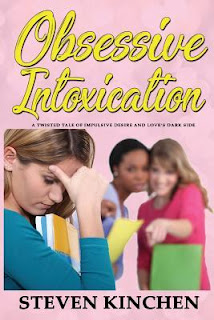 Obsessive Intoxication: A Twisted Tale of Impulsive Desire and Love's Dark Side by Stevie Kinchen
My rating: 2 of 5 stars

The story opens with our primary character 20-year-old college student Diana in pain over losing the love of her life. She's cutting herself and she's screaming out loud (literally) in pain. No one hears her in the home. She's loved this person since she was 15 and he was a 34-year-old instructor at her school. While her mother treats Diana as if she's a pre-teen, her father and older sister treat her harshly and with little regard to how their words will impact her. I won't reveal the connection the "love of her life" has to the family. But needless to say, he is an intricate member of the family. As the story builds and you are anticipating a major reveal and showdown, it drops you. The ending /showdown is wrapped up in 3 very short sentences as if the author ran out of steam. Unfortunately, this story was a very difficult read. Not because the topic was difficult to follow or that the story was not one that didn't have "legs", but it was riddled with inconsistencies. I think for me to provide constructive feedback on this review, I'll use a pro, cons and random bullet point format with examples.

Cons
> Underdeveloped characters
> Little to no formatting or structure
> Sophomoric & stilted dialogue didn't seem to fit the characters or the story
> Poor execution
> Poor transitions
> Incorrect word usage Example " My heart harms when I see him with my sister" OR
> Diana says she cuts herself on a package she was trying to open and Michelle responds "Do you expect me to believe your hocus pocus?"
> Contradictory statements Example - Michelle instructs Diana to get a kettle out for tea. Michelle then states "What are you doing? Did I say to get the kettle?" or after Michelle instructs Diana to put the kettle on the stove, Diana responds I don’t know how and then two sentences later screams " I know how to make tea" and details the steps.

Random-
> Who were the characters? Why were they so cold toward each other?
> Why did Diana love Xavier so deeply?
> Xavier was no longer her teacher, but he called her baby and she called him sir. Their interaction implies a D/S element. Was this the case?
> What happened to Diana?
> Is there a part two that resolves all the unanswered questions?

I would love to see this story re-formatted, re-edited and re-released. This is a good story that got lost in execution. And I am positive this project is not indicative of the author's talent. That being said, please read for yourself and be sure to leave a constructive review.