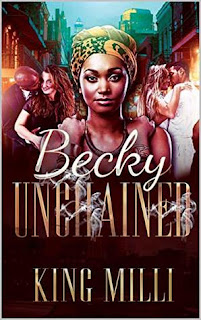 BECKY UNCHAINED by KING MILLI
My rating: 3 of 5 stars

First things first- I loved the cover and wow that opening was an attention grabber. I felt every bit of Pamela's emotion. This story dealt with a problem as old as time in the black community "colorism".

Pamela a strong, educated black woman married Darius. Pamela was made to feel that her dark skin was inferior to those with lighter or white skin. The author does a great job with the young Pamela and the school psychologist. While she went on to educate herself and become a top performer in her field, she, unfortunately, attracted and married someone who hated himself and his blackness. Self-hatred was something that was ingrained in him as a child by his father's words and actions. After having "arrived", Darius cheats with Becky. Becky, who thinks that her success resides solely in the pockets of a rich man. So she sets her sights on Darius who is all too willing to oblige. Becky's mother, Charlene, tries to warn her daughter to no avail. She knew Darius' wife and knew she was a good woman.

As the relationship between Darius & Becky forges ahead, we see the deterioration of the relationship between him and his children as well as his protégé. In each interaction with his protégé, the conversation is the same hate-filled diatribe. You could feel Michael, the protégé, getting fed-up with the monotonous rhetoric. Especially the more he forces his lifestyle on him. His son turned away from him, while his daughter dated an older man.

All of the hate and mistreatment of his family and friends comes to an end with one conversation from his father. This conversation motivates him to move forward and mend broken relationships and ultimately himself. I won't share the outcomes for all, but this story quickly became Darius after the first chapter and I think it was a great way to go.

There were a few formatting and structural issues (incomplete sentences, tense change mid-sentence, character mix-ups, and unclear transitions) that made for a confusing read at times, but the overall message was not lost. This was Darius' story and his supporting cast helped tell it.