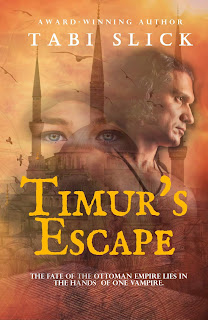 Timur's Escape by Tabi Slick
My rating: 4 of 5 stars

I received this ARC in exchange for an honest review.

Now that the business out of the way. Wow! I loved this story. It had political intrigue, betrayal, murder and I love that couldn't be denied. The author painted such a vivid picture of the Ottoman Empire that you could see the rich tapestry, the architecture (the mosque Timur used as a quiet place). The characters truly came to life. Timur's self-loathing. Emel's hurt at a sister's betrayal. I love the electricity between the two when they shared their first encounter and then their first kiss. The discovery that Emel knew of Timur's true nature was handled so matter of factly that he didn't know what to expect. This was a well-organized story with developed characters and a plot twist at the end that threw me for a loop. I appreciated the historical note provided by the author. It helped put into context why this era as chosen for her story.  It was also a good reminder of how cutthroat the political world was (and still is on some level) including the mothers of sons.  Sons were vital to the success of an empire.

The author did her homework to ensure that although this was a fictional story, it still held accurate and true to its time frame. How will the fact that both sister's share the same gift playout as this story develops? What will happen to the current Sultan? The current regime? Emel's family? Book 2 where are you?