We Smash Teachers by King Milli 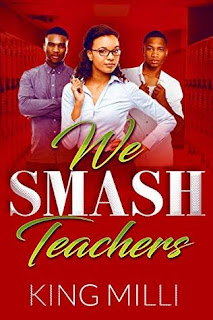 This was my first read by this author. So I am unfamiliar with his writing style or creative process. This story was about Bianca a married woman who enjoyed the danger and "freakiness" of 18yr olds. While her conquests are legal, the relationship is inappropriate because she is their teacher. The primary focus is on Bianca, Jason and Michael, 18yr old best friends.  Bianca's lackluster sexual relationship with her husband, a Jerry Springer moment & leaked video leads to her sexual exploits being divulged and she becomes the "hot topic" on social media and the news. Michael, the reckless one, is forced to mature in a way that he did not readily accept.  Jason, the respectful one, faces a harsh truth about life and love as does Bianca.

As far as structure & content, the story presented as more of an outline that was not fleshed out. Don't get me wrong this story was chocked full of potential to make the characters, as well as their individual storylines, pop. But this version, it felt incomplete & as if we were given the bare minimum. The story was not developed completely nor were the characters. For these reasons, the story did not flow or engage me as a reader.   There was a lot of repetition especially any scenes between Michael and any male character.  There were definitely missed opportunities to entertain and inform i.e. Michael's involvement with the cheerleader, the husband's reaction upon learning of Bianca's deeds. There were some good points to focus on -abstinence, positions of authority and sex, black excellence. But without something to grab your attention and keep it, those points are glossed over and given little thought. Unfortunately, the most provocative thing about this story was the title………at least for this reader. All that being said, please read it for yourself as we all receive stories differently. There is a new edition of the book that was released. I may go back and read that version to see if it changes how I received this story.

Reviewed by KayBee
#justmytwocents
Now let's get you that book!