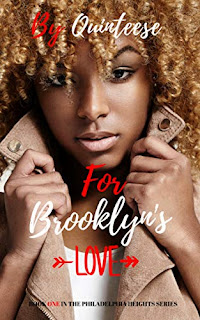 For Brooklyn's Love by Quinteese
My rating: 3 of 5 stars

Dating with purpose (God's purpose) is the message

This faith-based love story between Barry, a successful sports agent, and Brooklyn, a fashion designer, and an author was a feel-good story of healing and allowing faith to guide you during your courtship. The story opens with Barry's 2yr relationship with a woman named Simone ending. She did what many do to those we claim to want and love and that plays emotional games, including the ever popular " I think I'm pregnant" or "I'm coming to use as a woman" and she lost.

Thanks to a spiritual nudging from God Barry went on to meet his future love at a conference. During their first date, a special prayer spoken solidified to the duo that God led them to each other. They both had a lack of love growing up including one being sold into a sex trafficking ring by a family member. The story takes you through them learning to heal from their past hurts, trust in faith and each other. It was a good story, but......That's what I felt at the end. It was good, but ...

And I still can't quite put my finger on what that "but' is yet.

Now, the author delivered solid backstories and current profiles for the characters. It ( the story) was well written and had great formatting. You weren't bogged down with the preachiness that can be found in most faith-based loves stories. The story was low on angst, drama, romance and of course, there was no sexual content to be found. I was okay with all of this...but.
However, there was something that didn't quite allow me to connect with the characters and become invested in their outcome. I think maybe I felt that there was some missed potential to make these characters interesting i.e. the Simone conflict, the fallout from the launch press conference.

All in all, the author delivered a solid story that a reader who is loves a feel-good romance will enjoy. So, judge for yourself and don't forget to leave a review.