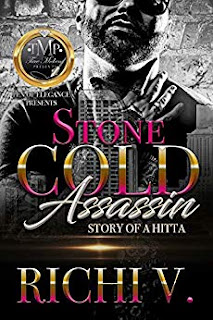 Stone Cold Assassin: Story Of A Hitta by Richi V.
My rating: 2 of 5 stars

Solomon, the former street assassin turned preacher, his family, his church and his past

The story opens with Solomon married and a preacher of his own church with a wife on a cocaine and 2 adult children ( 1 stripper, 1 killer) doing their own thing and unaware of their father’s bloody past. Someone from Solomon’s former life comes to him looking for “The Shadow” and this is when the chaotic madness ensues.
The Good-
The Shadow is the most notorious killer the streets have ever seen and everyone fears him. When someone appears to have taken something that belongs to him. He goes on a murderous rampage filled with betrayal and twists at every turn. Many characters are introduced so pay attention and everyone is untrustworthy and more deadly than the last. Great story, interesting characters, and a good cliffhanger. The Shadow was cold, emotionless and sexy. I was completely engaged and it was easy to follow. Well until Chapter 18 and then ………….

The Bad-
Up until Chapter 18, the story had little to no errors and I was completed engaged. The story was easy to follow. And then it appears as if the editing job was done from Chapter 18 on. The errors became a huge distraction and began to cause serious confusion. There was incorrect word usage, character mix-ups, missing plot information, and redundancy. The fact that Shadow was this most “dangerous/notorious killer” became almost comical. You got the feeling that if a character needed something to say, this was mentioned. It literally was on every 3rd or 4th page. As the story evolved it became chaotic. There was a betrayal, someone returning from the dead or some other “twist”.
This story that started with so much promise was ruined by lack of a final read through. I loved the plot, liked the supporting characters although it became a bit much to remember who was double-crossing whom. Because of the first 17 chapters, I wanted to see how the story ended and who was left standing. But, I found myself skimming pages, because it was now a superficial story riddled with errors in literally every paragraph. This made for a confusing read as I attempted to figure out what the author meant to say.
Examples:
Example of a confusing dialogue-
Vello made Solomon promise him something before they go on a job together. He looks at Shadow and says “don’t tell myself about this”…there was no point of reference for me as a reader. What was the promise? Was it significant?
The confusing dialogue between Shadow and a street soldier “you just a young buck in training, what are you doing here? “ the street soldier responds “ I to use the phone, “
Random:
The big reveal of how Vello became boss was actually the least shocking revelation of all. I was expecting something major after the build-up.
Everyone “bucks” and either has a gun shoved in their mouth, hit in the head with a butt of the gun, shot or the other person backs down quickly or attempts to buck back and gets shot. It made no sense. Everyone can’t be deadly and dangerous
When did the bartender reveal star had a child? That whole passage was missing
A blind mother is in the house with 2 separate shootouts and heard no gunfire? During the second she’s asleep and remains asleep when someone goes underneath her mattress to remove guns. I assume silencers were used each time even though shotguns were also used? I don’t know.

I hope the author finds their footing in the sequel. This was an excellent story ruined by not reviewing the final product before publishing. (That's my two cents)