The Morley Brothers: Seduced by a Boss' Love 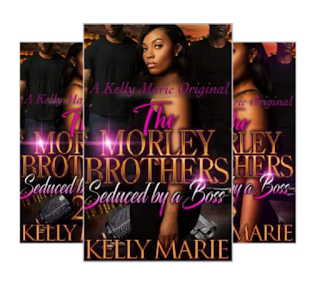 Synopsis
Life was all so simple until three women crossed paths with the Morley Brothers.
We meet Bronnie a twenty-eight-year career-driven woman who literally bumps into Aidonia ‘Alpha’ Morley - the eldest and next in line for the Morley empire. He’s like a breath of fresh air when she sees he’s not threatened by her career - like other men - and doesn’t hesitate to give him her number.
She is immediately smitten by him and finds herself falling for him. But Bronnie has no idea that Alpha isn’t who she thinks he is and he’s holding a devastating secret that can not only destroy what they’ve been building but can cost Bronnie her job.
And when the truth comes from Alpha’s old fling she’s left wondering what to do next and most importantly, was anything she had with Alpha real?
Gucci has been dating the best friend of Achilles ‘Blasta’ Morley for the past two years - while he dated hers, Mariah.
The two couples had a strong friendship with double dates being a common occurrence.
But when Gucci’s boyfriend Pilot starts acting strangely it leads her and Achilles to find out that they’ve been betrayed by the two people closest to them. Together, they seek revenge but it backfires. Just as Gucci and Blasta made sense of what’s going on around them, another surprise hits them and it has them at odds once again. Gucci is left with an ultimatum but which one does she choose?
And lastly we meet Korrey - best friend to Ares ‘Soul’ Morley the youngest of the Morley clan. She sees her best friend following in Alpha’s footsteps of having a plethora of women at his disposal and she doesn’t like it. She tries to encourage him to settle down with one woman and even tries to help in more ways than one, but Soul doesn’t listen - until it’s too late.
But being his best friend it’s not so easy for her to walk away and they soon find themselves stuck in a dangerous situation. One that could have been avoided if Soul was just honest from the beginning and it has Korrey wishing she left it alone.

Series Review
This author owes me nothing ith this series. The plot was engaging. The Morley's weren't your typical crime family. They were next level. The men were crazy alphas with a soft spot for the women they loved. The twins, Zeus and Thaddeus, as well as Athena, stole every scene they were involved with the next generation of Morley men. I loved that the author had the women give as good as they got. Black love and romance was front and center. The plot was organized and executed well. The story was also true to its genre.

The only con for me was in book one there were lots of characters with nicknames and it was hard to keep track of who was who without going back to check. I think lovers of urban fiction romance will enjoy this series immensely.


Umm Kelsi-Can we get a backstory on the twins, Athena and how they became the heads of the family? I'm just saying.


View all my reviews