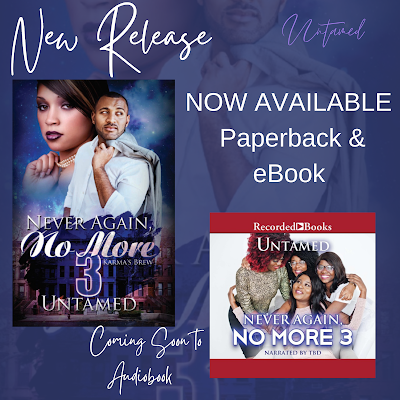 NOW AVAILABLE!!
Never Again, No More 3- Karma’s Brew
by Untamed
Synopsis: In part 3 of the dramatic Never Again, No More Series, Trinity, LaMeka, Lucinda, and Charice are back with brand new drama. Although they seem to have escaped their pasts, they find out saying never again, no more is easier said than done.
Trinity has moved on with her first love, Terrence, and has seemingly left all her troubles behind. However, when you have a past named Pooch, it can and will come back with a vengeance.
After LaMeka barely escaped the death grip Tony had on her, her life has truly come full circle. However, she fears her sordid past is not distant enough to fully embrace her new lease on life--and then again, neither is Tony.
Weathering storms is one battle that Lucinda is used to, but when she falls in love with Aldris, those stormy days are a thing of her past. That is until Aldris's past delivers them a shocking surprise. She'll find out weathering storm isn't the problem; it's surviving it.
Charice and Ryan have moved on...together. It is a marriage of pure love and pure bliss, until Lincoln shows up, determined to prove that it is a marriage of pure lies.
Slowly but surely, these ladies' past trials begin to stir up trouble in their current situations. The karma is brewing, and new hot tea is prepared to be served by way of former lovers, love children, and deeply rooted secrets. What will happen when the women and men are forced to face the drama they've stirred?
Genre - Black-African American Fiction Romance
Publisher - Urban Renaissance
Pages - 320