Of Ash & Angels by KC Decker 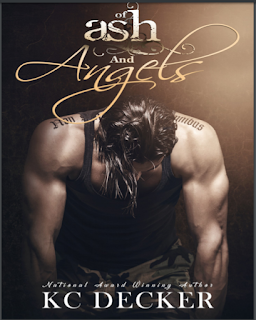 My first thought was this cover was sexy.

Justin right off the bat had me swooning and wishing he had not been dealing with the issues he had on his plate.  I think when he met Norah they were perfect for each other from the onset. Her personality was genuine and their connection to me was almost immediate. I liked the complexity of the characters and the way the author developed them.  The relationship wasn't quick easy. There were games being played I won't say by whom. One thing that I didn't particularly care for was the POV's that offered the repetitive conversation.  I don't want to go into too much detail and give away too much. I definitely enjoyed the story.  I think it was structured well with a swoon-worthy plot.

(I voluntarily received this book in exchange for an honest review.)