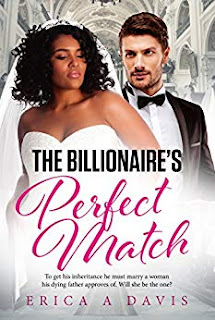 In, the Billionaire's Perfect match by Erica Davis, Billionaire heir Blake meets his one in a million in Lea.  The relationship was not an instant-love situation, but it progressed very quickly. Within 7 weeks, a bet was made to gain a fortune, feelings developed, true colors were revealed, a couple of cease and desists were issued, death and then declarations of love occurred.  Skip to 6 months letter they were married and a bet was made with a former friend that the marriage wouldn't last……the end….And before you ask, yes the story ended just as quickly and abruptly. The ending, awkwardly as it appeared, implies a book 2, as does the title, I couldn’t find it. I actually would like to see what happens. The author packed a lot into the story by staying on the surface of activity and potential drama. But, she did manage to give us pretty developed characters.   However, her story only took up 60% of the book.

The second story was a short BWWM pregnancy romance titled Carrying his baby by Vanessa Brown.  In this story, a one night stand creates an unplanned pregnancy.  The parents came to a compromise that worked for both until it didn't. They spent together and eventually wanted to be a true family and share their lives as one. Again, the characters were fairly developed and the author stayed on the service with activity and had no drama in the story to create an interesting storyline. She takes us through the beginning of the 3rd-trimester check-up visit and we are abruptly dropped from the lives of these two characters. I could not get invested enough to want to see the outcome of this story. There was not enough to pull me into this one. I think it has potential.  Potential I hope is met in book 2.