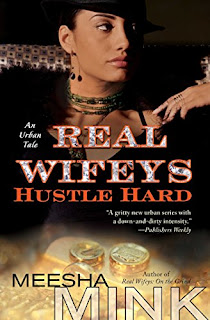 This post is a review of all 3 books in the urban fiction series. I re-listened to them on audible.
Book 1- On the Grind
The foolish had hard lessons to be learned in this installment. This was Goldie's story and you either loved her or hated her. The author gave us a decent variety of interesting characters with good backstories encased in a good storyline. The author did - in my opinion- a good job of depicting the “young and indestructible attitude” so many have in their youth. The importance of education, self-love, and determination & what could happen when you lack them the ending packed a punch. There were times when the story was a bit "wordy" due to a lot of repetitive monologues. Honey Jones', the narrator, sleepy delivery relaxed me so much that I did nod a time or two as I listened lol. Sorry
Book 2 - Get Money
No lesson's learned for this heroine. This is Luscious' story.
I struggled a little with this book. not because the characters were not interesting or that the storyline was not as strong as in book 1, but because of the amount of repetition, wordiness, incorrect word usage and details that added nothing to the story.
The supporting characters, while not developed, were the saving grace in this story. Make Money, Peaches, Eve & Michelle made the book interesting and gave it a little life. Also, the narrator was a bit more animated in this installment. And we all know a good narrator can help a story. All that being said, I loved the message of this book. the message of how obsessive behavior, jealousy, self-hate, lack of accountability takes so much energy out of you and in the end only hurts you. The self-hate that Luscious possessed was amplified when her boyfriend cheated with her friend. The author did a great job of showcasing her misery with the one-sided revenge plot. Her "arch nemesis" didn't give her a second thought, but did step in to save her twice when she was in need. It’s rare that I root for someone who is supposed to be the victim to meet their ruin. But that's how well the author wrote that character. It was interesting that there was no real hatred for the men who wronged her. It's indicative of real life. Men will often get a pass for their wrongs while women tear each other apart. ....umph
Random thoughts-
*At what point was Luscious involved with Make Money and his dope game activity? The story picks up with them meeting in a club in New York. And he was already a "one-hit wonder:. A month after that initial meeting, Goldie started dancing for him. The drug activity was referenced, but it didn't fit with the timeline provided and no explanation was forthcoming.
*I kept saying girl "Get a job or a hobby instead of pining away and wondering what he's doing resulted in monotonous repetitive conversations took away from the story.
Book 3 - Hustle Hard-
This was Sophie's story. This was the most interesting installment of the series.
There was good movement, some character development, the interesting dynamic between the couples, betrayal, inflated egos, pedophilia and character crossovers that tied all 3 books together. All of these elements combined to make an interesting tale. I would have enjoyed the first 2 books much more if this formula was executed.
The only things that could have made this story better were less label/brand name dropping, less of Sophie's inner monologues and removing some of the sex scenes. They didn't add much to the story.
Random
It was interesting to learn that Hunger was, in fact, a character from one of the previous books.
Suga was not as up on “game” as I would have thought she would be as Dane’s woman. Several years together (& based on the description of her childhood neighborhood) you pick up something even when your man tries to keep you out of it. She was extremely naïve, made silly moves in a bid to be tough and I think this is why her character just didn’t ring “true” for me.


All in all, this was a good series to listen to due in large part to books 1 & 3. The author tied all the stories together in an interesting and believable way. She gave a solid story with clear direction with little to no errors.

Now let's get you that series!