Truce (The Cartel Publications Presents) A War Saga by T. Styles
Synopsis - After searching for over a year for his twins Ace and Walid, Mason was alerted to a quiet tree-lined neighborhood. His world is rocked when he not only finds his sons but also his best friend Banks Wales whom he assumed was dead.There is one major problem, Banks has changed.Suffering from extreme memory loss after botched brain surgery, Banks is transformed into a beautiful woman courtesy of his grandmother, Gina Petit.
In Book two, be careful what you wish for never rang truer…After years of plotting, Mason Louisville finally has what he always wanted. Upon selling Blaire Petit into believing that she was his wife post her brain injury, he expects things to be smooth. But the more Blaire becomes accustomed to their lives together, the more she starts to feel like something is wrong.In walks Jersey Louisville, whose sole purpose is to make Mason’s life a living hell while also seducing Blaire into remembering her life as Banks. She uses one weapon to reach her goal, her body.As Blaire and Mason’s worlds begin to unravel, it soon becomes clear that the twins, Ace and Walid, are also bringing the drama inside the Louisville Estate.
Book Review - This novel picks up with Banks still suffering from memory loss and living as a woman with her grandmother at the Petit estate and running the company. Not only does the grandmother enjoy the new Banks aka Blair, so does Mason Louisville. He finally has who he wants and the opportunity to live with her as he has always dreamed. There is just one problem. Banks is starting to surface in Blair leaving her confused and those around her uneasy.
If you've followed this saga from Book 1, you know the love/hate relationship between Wales' and Louisville clan has been nothing short of drama-filled. The drama continues in this addition. The story moved at a moderate pace and there were small pockets of movement. Although I will say the standout characters in the most recent books Truce 1 and 2 were the twins, Walid and Ace. They were written as highly intelligent 4 and 5-year-old children often engaging in conversations that one would assume was well beyond their years. These two characters were much more entertaining than the adults as the adult dialogue was repetitive in both books.
But don't take my word for it, you can get your copy of this series by clicking the day and support the author by leaving a review. 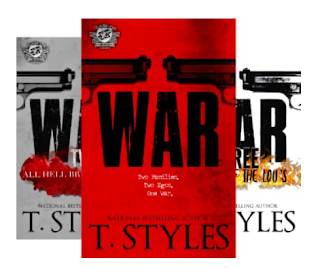