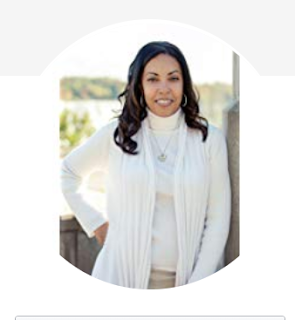 I am so happy to introduce you to a woman who has given a nod to female power in the paranormal fiction genre with novel Midnight Comes with the Dawn. Darlene Burns, a California native, and former Oceanography major realized her true passion was creative writing. When her children were old enough, she returned to writing. Reading and researching all elements regarding the supernatural have long been passions of hers as well, as old Vincent Price and Bela Lugosi movies. However, she has not limited herself to the creative arts. She is also a fellow Blogger, a Philanthropist, and LGBTQ Advocate. 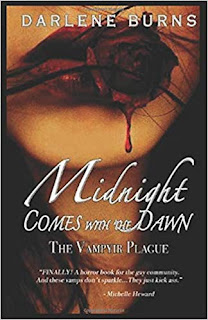 I had the pleasure of reviewing Midnight Comes with the Dawn, which has been released in English, French, Portuguese, and Spanish. In this story, Queen Katrine feared and revered by many African countries is turned into a Vampire in order to fulfill her destiny. Her maker Darius comes to her to reveal that her deceased father was his best friend and knew what he was, which makes her acceptance of what she is to become no easier. Fast forward Katrine is now known as Midnight and is the leader of a lesbian clan of Vampires. A plague is killing not just humans, but Vampire kind as well. How will the oldest living Vampire in her clan find a cure? Well, you will have to read the story and find out. This was a different spin on the Vampire tale that we normally read in paranormal fiction. Instead of the usual roguishly handsome brooding male Vamp, the author gives us a strong female lead, well more than one. Alex is a force as well. You can get more of her story in Book 2. The author did a good job of pulling you into each scene with the characters and kept a bit of realism to the story which aided in making it easy to connect with the story.

1. When did you first realize you wanted to be a writer?
I first realized I wanted to be a writer was after I completed an essay in high school in my junior year. My English teacher at the time encouraged me to write more. Poems, book reports or anything that was of interest to me. She ignited a passion I couldn’t contain.
2. How long does it take you to write a book?
It depends. I have to do a lot of research on the subject matter and that what consumes most of my time. I want to be as thorough as I can.
The series that I’m writing is a five-book series. I’m doing something unprecedented.
Each book is from the perspective of the main character. The book itself goes from past to present as you read each chapter. The concept of the entire series takes you from the end of the plague to the beginning of how it started.
3. What is your work schedule like when you're writing?
When I can. I write mostly in the morning. There are days that I can write for six hours straight. Then there are days I can only write for fifteen minutes. I try my best to write something each day. Even if it’s not related to my current WIP. I also have a blog which I try to write for weekly.
4. What would you say is your interesting writing quirk?
I think an interesting writing quirk I have is I write to certain songs. When I’m writing about sadness or a dark mood, I turn to one of my all-time fav playlists and put it on repeat. I have read passages at book signings and I hear the music I wrote to inside my head as I speak.
5. How did you feel when your first book was published?
To be honest, when my first book was completed I was just glad I finished it. It wasn’t until I received my first review from an avid reader that I became excited. She stated “Don’t stop writing. And when is the next book?” She read my first book in a day.
6. Where do you get your information or ideas for your books? What inspires you?
The information or ideas I get for my books comes from lack of presentation in the genre I write in. Horror/Fantasy/Sci-Fi doesn’t have a lot of characters of color, LGBTQ and particularly where women are the heroine. Most of the time, in many stories women represent the villain. I wanted to show that women could be both (villain & heroines) and create characters of diversity. I gather my inspiration through knowing that someone will read my books and not only be entertained by somehow see themselves.
7. When did you write your first book and how old were you?
My first book was written in 1997. I was 28 at the time. However, in 2012 after a conversation with a friend, I revised it to the version that was published.
8. What do you like to do when you're not writing?
Spend time with my partner, binge watch on Netflix, reading (of course) and video chatting with my kids & grandchildren. My hobbies include swimming (if available), pinning on Pinterest and listening to music.
9. What was one of the most surprising things you learned in creating your books?
10. How difficult it was to find images related to my characters. I wasn’t surprised, but I was taken aback by the amount I did discover.
I also discovered I hate editing! A necessary evil.
11. How many books have you written? Which is your favorite? Why?
I’ve written two books so far. My favorite has yet to be determined. If I had to predict which book will end up being my favorite, it will probably be Book 4. It will be from the viewpoint of my Transgender Vampire. She is very fun to write.
12. Do you hear from your readers much? What kind of feedback have you received?
To be honest, I don’t hear much from readers. I hear from supporters on my Social media platforms. I’ve tried to reach out and connect with my fan base for feedback. They want to know about the personal side of me and not so much my authorship at this point in my writing career.
13. What do you think makes a good story?
I think if it has something relatable as it’s base. I believe everyone who reads, has a genre that they particularly gravitate to. However, if someone recommends a book that may be relatable, I believe they will step out of their comfort zone and read it.
14. As a child, what did you want to do when you grew up
I wanted to be a pediatrician when I was younger. I also thought that I wanted to be in a place where I could help children. I liked going to the doctor when I was younger.
15. What can we look forward to from you?
I will complete my short story series called Vampisodes* only featured on my website. I have one Vampisode left. I am working on the third installment for my five-part series. I’m looking to Book 3 novel in the Fall of 2020. I will also have a few appearances lined up for Pride month this coming June.
You can connect with the author on Amazon , Website and Instagram.