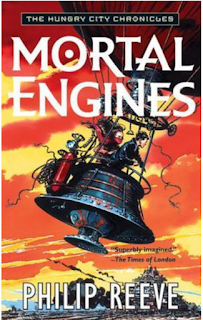 Mortal Engines by Philip Reeve
My rating: 3 of 5 stars


Synopsis
The great traction city London has been skulking in the hills to avoid the bigger, faster, hungrier cities loose in the Great Hunting Ground. But now, the sinister plans of Lord Mayor Mangus Crome can finally unfold.
Thaddeus Valentine, London's Head Historian and adored famous archaeologist, and his lovely daughter, Katherine, are down in The Gut when the young assassin with the black scarf strikes toward his heart, saved by the quick intervention of Tom, a lowly third-class apprentice. Racing after the fleeing girl, Tom suddenly glimpses her hideous face: scarred from forehead to jaw, nose a smashed stump, a single eye glaring back at him. "Look at what your Valentine did to me!" she screams. "Ask him! Ask him what he did to Hester Shaw!" And with that she jumps down the waste chute to her death. Minutes later Tom finds himself tumbling down the same chute and stranded in the Out-Country, a sea of mud scored by the huge caterpillar tracks of cities like the one now steaming off over the horizon.

A picturesque sky soaked in blue overlooked the horizon. This was a shadow world, a world reeling from the doomsday event.
Humanity's character crisis hit a dark turn of events when global leaders, power-drunk with ego, panicked and pushed nuclear triggers, and plunged the world into a state of perpetual chaos. The world was lost.
Yet from the ashes, arose the mortal engines. The Mortal Engines (concrete moving parts of steel) were forged from the rotten carcasses of major cities, cities that would thrive off each other. Yes, thrive off each other! How's that possible? Simple! By feeding off the woes of perceived dying cities scavenging for scarce resources.

Mortal Engines is a science fantasy that was written by Philip Reeve, published in 2001, and in 2018 it was adapted to a feature movie by the award-winning Hollywood filmmaker, Peter Jackson.
This book has everything for those who love a science fiction rendition of futuristic post-apocalyptic fantasy. One thing the readers of this book loved is the way the story unfolds to reveal a love story propelled by vengeance. This classical revelation leads to a quest that sought to disrupt the inner workings of power, old tech scavenging, and resource plundering.

At the end of this tale, the classical age-long spirit of good triumphing over evil takes center stage, with the prime villain becoming vanquished by a famed foe, his erstwhile slain lover's daughter. Albeit slain by his own very hands. Karma at its finest. I would recommend this book to young readers who enjoy science fiction.

You can get your copy here and support the author by leaving a review.