10 Years Gone In Ten Minutes: Critical Red Flags That Led To Being Alone At The Altar 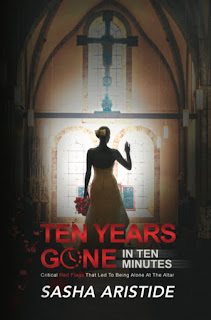 10 Years Gone In Ten Minutes: Critical Red Flags That Led To Being Alone At The Altar
by Sasha Aristide
Genre: Christian Living
Pages: 223
Description
Ten Years Gone in Ten Minutes, chronicles a ten-year relationship of a Brooklyn couple from the very beginning until the very end. This story begins in the church and unfortunately does not end at an altar. This story shows how a sweet relationship can turn sour within minutes. This story chronicles the critical red flags that were missed throughout a ten-year relationship, which led to being left in a hotel room wondering why. If these red flags would have been taken into consideration, maybe things would have taken a different turn. She thought she had a fairytale relationship, but little did she know what would lie ahead. Sasha’s book is based on a rare real-life experience. This story is so unique that it might cause you to look at your own relationship from a different perspective. Not only is this story for women, but it is also for men, no matter what type of relationship you are in. Sasha hopes to not only provide an understanding and reasoning of her experience but to show that solace is possible after an emotional tragedy. Not only will this story take you through an experience, but it will leave you in awe.
Book Review
The story opens with a "runaway" groom situation and then the author takes us back to the beginning of the relationship between bride and groom. After meeting in church and sharing a love of faith, they get to know each other and ultimately date. The story comes full circle with the aftermath of the canceled (I think ) wedding and ends on what I think is a cliffhanger.
Here's what worked in the story. The characters each had a certain level of transparency that could possibly make them relatable on some level. I also like the messaging provided between each chapter by notable influencers.  The author's intended message was positive and meant to provide guidance for those who found themselves in uncertain situations.
Here's what didn't work for me as I read the story.  The disjointed writing style, which began with the opening scene, made for a very confusing experience.   For example, one of the bridesmaids says let's go out for a drink and get loose. They go outside smoke and then 10-15 minutes later they are back in the room? So, this negates the big argument about going out and celebrating Sasha's last night as a single woman.  Did something else happen in between the argument and the smoke?
Or example two of a scene that confused me.
"We went for a swim, and then Kevin and I walked back and rinsed ourselves off in the shower. O my God, you would have thought we had just come out of a hotel room. I mean we had our swimsuits on and everything! But I had to admit, I did like it just a little bit. Kevin asked me out after that. I turned him down because I wasn't ready."
Why would people think you just came from a hotel room? She has to admit she liked what? There was no point of reference for either instance. The author may know what was meant, but the reader needs to know as well.
There were several issues including poor sentence structure resulting in poor flow, repetition resulting in wordiness that added no value to the story, poor transitions, lack of chemistry, and missing words. Combine all of these issues and the red flags were missed as well as the full message that the story was meant to convey.
The author is fantastic and I believe she truly has a great story to tell, but many will miss it without this current story being revamped with a bit of developmental and line editing.  While I'm not sure if this was a fiction story inspired by true events or if this was supposed to be a memoir, I think this is a good example of missed potential.
I would love to hear your feedback, please get your copy of the book by clicking the image below and support the author by leaving a constructive review.
I was provided a copy of this book in exchange for honest feedback.
View all my reviews