Mafia Boss Got Me: Sergei 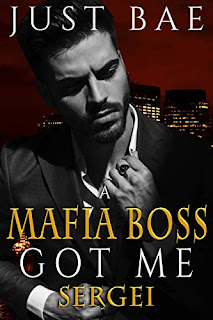 Sunny Rivers is a woman on a mission. She wants her brother Stevie back and is determined to get him by any means necessary. Little Stevie had got himself in hot water with the top Russian Mafia boss of New York and now big sister has to come to his rescue. What will it take to convince the Sergei Larov, New York City's most notorious crime boss to let him go?

Sergei doesn't like women in his business. He's a man who rules with an iron fist. But Ms. Rivers has impressed him by taking on his top muscle. It's enough to give her a meeting to hear her out, right? Will Sergei bend his self-imposed rules to have pity on Sunny's little brother or will he ask for more?

Wanting her brother back, Sunny makes a deal with a Mafia leader, Sergei. If you know this author, you know what your getting with the Got Me Series. You get a snippet or a "bite" of a story, which usually consists of 1 or 2 scenes between characters. So, I knew going in that the ending would be left open. My hope was that the author would provide characters that were interesting enough that I would want to know what happens next and maybe just maybe a little T and A.
Well for the first time ever in this series,  I got exactly what I needed. I love Mafia stories, especially when there is unexpected chemistry between two characters, the potential for violence and more. I liked that the female primary was a tough young black woman who could take out a 6'6" bodyguard, but vulnerable enough to allow passion to overtake her. Well, she didn't have much choice with that one.  She gave of herself to free her brother who found himself in trouble with the mafia.  Sergei who found women to be disposable seemingly met his match and could not contain his lust. So he made her an offer she couldn't refuse to free her brother.
The story flowed well despite having a few errors that I almost disrupted it. The characters were interesting. The author did a good job of creating the necessary anticipation of what will happen next. This reader for one wants to see the story of Sergei and Sunny play out to completion.
My rating is a 4.5 rolled to a 5 on Amazon. You can get your copy below and support the author by leaving a review.