The Black Men Who Struck Oil 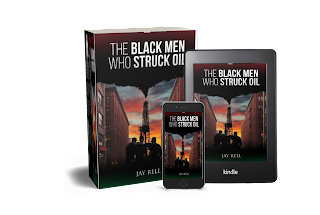 The Black Men Who Struck Oil
by
Jay Rell

From the creator of conscious urban fiction comes a classic crime saga set in modern-day New York City. The story follows young black men with varying degrees of connectedness to the streets, as they strive toward achieving power, wealth, and self-reliance in a society dedicated to rendering them members of a permanent underclass. Crispus, a teenager wise beyond his years, navigates his day to day influenced by the words and deeds of his revolutionary elders. He is also drawn to the glamorous and brutally violent lives of his older brother Anthony and the people he runs with. Told at a pace suitable for the traditional urban fiction fan, The Black Men Who Struck Oil takes its readers into a world of organized crime and intelligent black thought. Written in a lyrical style with an eye on character development, readers follow our men in their attempts to strike oil the best way they know.

There were a few words that immediately came to mind gritty, thought-provoking, and next level.

Gritty was the ease in which the characters dealt with their circumstances and cleared any obstacle i.e. the book's opening scene and the "handling" of Jose and his deceit. If you know me, I love a good gritty, realistic scene such as this opening, especially when it's handled so nonchalantly. Anthony's young accomplice seemed unphased by the savage act. This tells you that he has seen some horrible things to be so desensitized.

Thought-provoking in the way the author uses questions like "And can you reform devil?" "Who made the Holy Koran or Bible?" or "Tell us what he promised his Nation would do?"

As you read you wonder how does the question tie into the movements of the characters? Then if you are like me, you stop reading to go and google a new term or reference made within the chapter or heck to just to answer one of the questions, because I'm nosey and I like to know everything.

Rell forces you to think about your own stance on hot topics as drugs, racism, and social responsibility. He uses the descriptive image to create the world in which characters like Anthony, Superb, Black, and Peter move in and out of seamlessly. He then peppers in black history to reinforce a message i.e. Uncle Omar schooling the boys on how the world sees no matter what they accomplish.

I think this story moved along a moderate pace was structured well. I was engaged from the onset and eagerly turned the page until I was left with an ending that tells me there will be a sequel. Solid characters, educational and entertaining content combined with this writer's talented pen resulted in a well-written story that I would recommend to anyone. Please get your copy below and support the author by leaving a review.