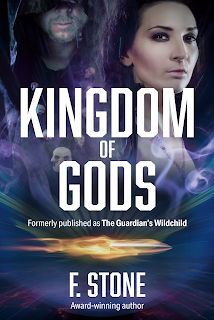 The year 2020, the planet has suffered a catastrophic loss of humanity and land mass. Twenty-seven years later, the energy crisis threatens to thrust man into the dark ages. Harsh martial law worldwide has created underground vigilantes groups. Admiral Garland is within days of delivering a miracle. His blind ambition has led him to an alliance with a nefarious woman, Madame. Her enormous wealth and lethal private armed force have proven to fit his need for absolute secrecy. If world government leaders discover what is behind locked doors on his naval base, his exalted reputation will be destroyed. His patience has paid off. He’s about to be crowned the world’s savior. He’s become blind to the chaos he’s about to unleash.

Madame has no interest in solving the world’s energy crisis. She witnessed the power of sun crystals when a South American tribe used the glowing blue and green rocks to suddenly calm a raging storm, and then turn water into sweet red wine. With access to the American government through Garland, she is poised to conquer the planet. The kingdom of the gods is now within her grasp.
Garland and Madame arrest a spy on the New Seattle Naval Base and send the wounded and dying prisoner to an armed naval supply ship under the command of Captain Waterhouse. He receives orders to execute the strange woman. Within a day, Sidney Davenport begins to unravel his disciplined life.

Sidney is a member of the secret and powerful Guardians. She failed in her mission to stop Madame. Desperate to forestall the madness that is about to consume the planet, she reveals a secret to her manipulating executioner. Little does she know, he has been dancing with the devil far too long to be trusted.

With Martial law has been activated worldwide and the world on the verge of the dark ages.  If you threatened the stability of social order, you were tried and summarily given a life sentence. Enter rebellion groups designed to destroy the government.  Government officials kidnapped, prisoners executed in public. You have a few key players to keep your eye on in this story. First up Madame, wealthy and set on conquering the planet. Admiral Garland working with Madame and manning the helm of the New Seattle Naval Base that houses a secret in the form of the sun crystal. This story was rich in mystery, murder, narcism, intrigue, and superpowers. Clearly, the author has some background or connection to the government and the military or maybe she just did her research really well. The detail in which she described the inner workings of each was interesting and managed to pull you into each scene.  Can we say the forced murder storyline aboard Butchart's ship?  When Sidney, a member of the rebellion, fails to die or respond to the medicines provided this was the beginning of Waterhouse's undoing and the author gave me a front seat ride to watch it.

I think of all the characters and concurrent storylines, I loved Madame's the most.  She is on some narcissistic level relatable.  A woman who knows what she wants has the means to get it and most importantly expects it.  She even had When she's crossed, she can't believe the audacity of the admiral, Sidney, and Danik, who you'll meet when you read this quick-paced well-written story.  You'll enjoy the chemistry between Sidney and Sam. It was touching, especially towards the end when death comes for one of them.  The same goes for Sam's transition to his new life.  Two words -male birth again this story touches on so much that it has enough to keep everyone entertained. You can purchase your copy here via Amazon.

Judy Weir / F. Stone explored a kaleidoscope of infinite ways of enjoying life. The only restrictions imposed by her parents were that racism was not acceptable and deliberately causing harm to any other being or creature for any reason was not tolerated. Upon meeting her spirit guide when she was a child, Judy’s life became a journey of experiencing the paranormal. Through her practice of meditation and Reiki and study of Shamanism, she’s been able to shift to dimensions that defy description. On February 15, 2002, Judy was honored to receive the Exemplary Service Medal from Lieutenant Governor Lois Hole (representative of HRH Queen Elizabeth II) for her service as a paramedic with Edmonton’s Emergency Response Department.