Debut author Nadia Diament brings us a one of a kind paranormal romantic comedy, BLOODSUCKING LAWYER. For Emma, working for a vampire lawyer wasn't part of the plan...and neither was falling for him. Fans of FBI/US Attorney series by Julie James and Kresley Cole’s Immortals After Dark series will devour this slow-burn, sexy yet humorous office romance. 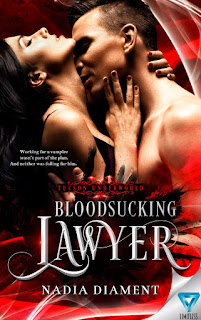 Emma left her career in corporate law to pursue her passion for criminal defense, but she can’t seem to catch a break. So when she lands an interview at a small law firm, she’s more than thrilled. But she has no idea what she’s in for.

Apparently he drinks blood instead of coffee, and his client list consists of creatures that go bump in the night. But, the way Emma sees it, if she can get through law school, she can handle a few pothead werewolves and shoplifting witches. So she stays. There’s just one thing she didn’t count on, and that’s catching feelings for her new vampire boss. Henry and his fangs become a temptation too hard to ignore, and no matter how hard she tries, she still falls for him. Problem is, everyone knows office romances have the tendency to crash and burn. But when your boss is a bloodsucking lawyer, odds are it’s a disaster waiting to happen.

Add to Goodreads here!
Only Available on Amazon and FREE in Kindle Unlimited!

It never hurt to have someone owe you a favor.
Emma walked away from them with a smirk. “Come on, you don’t want to be late.”
The two men scurried after her and slipped into one of the elevators just in time for the doors to promptly close behind them. The sunburned lawyer jabbed the button for the third floor and adjusted his bag on his shoulder.
“Thank you. I really appreciate it.” The sincerity in his voice made her look up in time to see him smile.
Emma returned the gesture but blinked in surprise when she realized that even with the sunburn, the dude in a suit was attractive. Not just Tucson attractive, but legitimately attractive. She’d been too distracted earlier to take a proper look. Deep blue eyes and artfully tousled brown hair. Given the sunburn, he was obviously pale, but she couldn’t exactly judge when she worked in an office all day and hadn’t had a proper tan since college.
He was tall and lean, and a three-piece charcoal suit accentuated his form with grace. As a lawyer, she should’ve been immune to the precision of a tailored suit by now, but he wore his so damn well. She’d been deprived since moving back to Tucson, whose general population relied on a steady supply of t-shirts and shorts. She had to admit, though, that she would happily take Tucson’s casual vibe; Phoenix’s conservative concrete jungle had worn her out.
The elevator pinged as the doors slid open, startling Emma out of her reverie. Now was not the time to be checking this guy out. She would do him this favor, then see if he had connections at any criminal defense firms. But nothing else—no personal stuff. She needed a steady paycheck before she could get lost in the mire of dating. Her student loan bills routinely gave her heart palpitations.
They hurried through the courthouse and finally tracked down the right room. As Emma approached, she realized she didn’t know the dude in the suit’s name.
She extended her hand for him to shake. “I’m Emma, by the way.”
“Henry.” His grip was firm, confident, and warm.
Emma didn’t put much stock in the notion that a handshake defined a person, but she could definitely appreciate the feel of his. She was reluctant to let go, but eventually did, bound by lame societal expectations and all that.
Apparently oblivious to her inappropriate staring, he fished through the inner pocket of his suit for a business card and a fountain pen. He scrawled something on the back, waved it dry, and handed the card to her. “My cell phone number.”
Emma ran her fingers back and forth across the textured linen paper. Mercifully, Wendell kept her from saying or doing something stupid—like asking Henry out for drinks.
“Er, yes. Nice to meet you, Ms. Emma. Can we go in now?”
“Of course,” she said with an encouraging smile.
Emma pulled the door open for Henry’s client and slipped inside after him. As the door started to shut, she turned back to look at Henry. Warmth suffused her when he pressed his hands together in prayer and mouthed a single word to her:
Lifesaver. 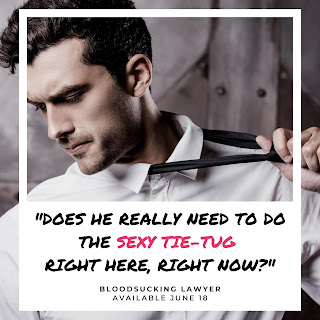 Book Review
This was my first read by this author. I was intrigued by the title. I love a good paranormal romance and to have a vampy lawyer as the lead in this romance had me all in to participate.  Henry in all his vampy goodness is overworked and not the most personable regardless of your species. He is serious need of help with his practice taking off thanks to the Tucson Underworld. The thought of an entire para-world had me excited and the author did not disappoint on this front -werewolves, ghost, witches to name a few that will sprinkle this colorful cast.  (Sidenote: The vampires are in Tuscon aka sun central. I know. I know. That was my thought too. Flame city in at any moment.) Enter the sole human that will be a part of this organization, Emma.
Emma with issues of her own wants/ needs to return to Tucson to be more present for her family and spend more time with her older sister. The fun comes in seeing how Emma will handle finding out that her new boss is not quite human and once the lines of professional and personal are blurred the reader is in for some cute romantic fun.
Emma was not the most likable heroine nor was Henry as dominant and self-assured as I would think a supernatural in his position should have been. But, these two worked somehow for each other.  I think the author did a good job of setting up this new series by providing a solidly structured plot, two developed characters to introduce us to the Tucson underworld, coupled with a very interesting cast of characters. While I would have liked the pace to be a bit quicker and the story shortened by 75 pages or so, I understand that setting up this new world takes time and deserves to be delivered expertly, which this author did. I think she is off to a solid start. 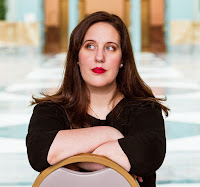 Nadia Diament writes paranormal and contemporary romance with equal servings of heat and humor. No stranger to a U-Haul, she’s lived in Arizona, South Dakota, and Washington, DC. She currently lives with her husband in Chicago, where she tinkers with fountain pens and loiters in coffee shops. Bloodsucking Lawyer is her debut novel.

This sales blitz is brought to you by Forever Write PR. For more information, visit our Facebook page! https://www.facebook.com/ForeverWritePR/