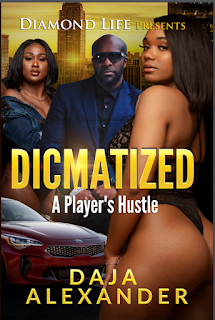 Book Synopsis:
Twenty-seven-year-old hustler, Ne’Shawn Johnson meets a lady online named Thiana. Thiana thinks Mark is her Prince Charming. She is unaware that Mark is really Ne’Shawn and has been catfishing women for financial gain.  Thiana and Mark vibe together well and start making future plans.

Meanwhile, Ne’Shawn's real girlfriend, Faeya Harris is pregnant. The relationship between the two has been strained due to unresolved issues and his habit of lying. When Ne’Shawn tells Faeya he is headed out of town for business,  he puts his master plan in motion. Once he leaves Charlotte to go to St. Louis to meet Thiana to swindle her out of her money, his dreams of building a drug empire are underway.

Ne’Shawn (Mark) and Thiana are in St. Louis making connections and getting money.  When he meets Thiana’s friend that happens to be Faeya’s sister, he sees his plan start to crumble. Faeya’s sister recognizes Ne’Shawn and sends an anonymous tip about the couple to Faeya.

After receiving the tip, Faeya goes to St. Louis to confront Ne’ Shawn. But to her surprise, he confesses his scheme with Thiana to her. Thiana is losing her mind slowly. She has lost control of the situation Mark, even going so far as to neglect her children and is beginning to feel like his personal "Sugar Mama".  Ne’Shawn is caught between two women. Thiana can help him get the money he always wanted and Faeya is his true love. He has to make a tough decision. Will Ne’Shawn choose money or love? What will this player’s scheme really be?

ABOUT THE AUTHOR
Daja Alexander's first novel is entitled Dicmatized:  A Player’s Hustle.  She has been writing since the age of eight.  The author enjoys spending time with family, reading, and most of all having fun.  She resides in Western New York.  You can also read the full feature written by Content Creator, KayBee here.