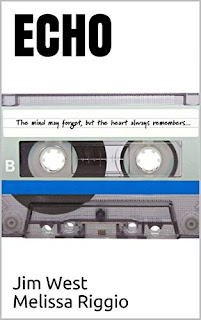 Echo
by:  Jim West and Melissa Reggio
My rating 3 of 5

SYNOPSIS
Set in early 1994 when Nirvana dominated airwaves, Clinton on TV, and love always in the air.

Ted used to have it all.  A wife, a baby, and a passion for writing.  Then it all came apart when his wife left with the baby, and Ted lost his passion for writing.  Now separated and living in a rundown apartment, Ted has let his life into a downward spiral.  Then one day at his construction job he has a terrible fall and wakes up with amnesia and thinks he is still in his twenties and still is an aspiring writer.  During his stay at home, until his amnesia wears off, he attempts to make changes in his life that he hopes he can keep.  Against the doctor’s instructions and advice of his friends, he keeps trying to make his life the way he wants it to be.  Ted meets a woman named Melissa and tries to resume his passion for writing as his passion for life and newfound love grows.
Things seem to be going his way, but he slowly comes to the realization that the doctor is right, and that one day he will wake up and go back to the Ted he used to be before the accident.  He at first tries to fight sleep, and when he accepts the fact that this new life he has created won't last forever he pushes Melissa away.  Ted does wake up one day back to his old self and is confused by the changes that have happened.  Will Ted keep the changes or simply go back to his old life?  Can love transcend memory?
The mind may forget, but the heart always remembers.

BOOK REVIEW
In the beginning, Ted is a self-loathing, lost person.  He has divorced from his wife, has a young son and is always late to a construction job where his ex-father-in-law is his boss.  He is an aspiring writer but can't catch a break.  His only constant is his childhood friend, also his co-worker, John.  One day, at his job, he falls and gets temporary amnesia.  It is in his recuperation that he falls in love with Melissa.  He does not tell her about his amnesia and that he could soon get his memory back and forget her in the process.  But, she too has a past she does not want to tell him about.  The story, set in the early '90s where the Seattle grunge rock scene is at its height, flows well and consistently.  I wasn't necessarily pulled in from the beginning, but there were moments of edge-of-my-seat action.  I wanted Ted to tell Melissa the truth and the authors did a great job of aligning what was happening within the music scene with Ted's comings and goings.  At the moment Kurt Cobain dies, a significant moment for Ted occurs. Overall, this story is about being forced to change and adapt to your life when you think you just can't do it anymore and love is always a path to healing.  I give this story 3 out of 5 stars and think anyone who loves music and romance, should give it a try.