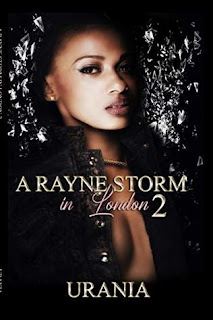 A Rayne Storm in London by Urania
My rating: 3 of 5 stars

Description
London Storm Twenty-Four at the peak of her career a loving boyfriend Levi Gibson and caring friends and family; any one would say she has her world in the palm of her hands. But things didn’t come easy for her; Her childhood was nothing short of a disaster as she witnessed the murder of her parents at the age of seven. The trauma she endured caused her to suffer long term memory loss and nightmares. In hopes to piece her missing life together; she will later learn sometimes things are better left hidden.
Levi long time best friend and the mother of his God-child Angela is secretly in love with him and the only way she feels she can take him from London is by using lies, deceit and violence.
One of her best friends out the four Raielle is dating her brother Blue enemy; word gets out along with another much unexpected surprise which causes a fatal outcome.
Raielle’s boyfriend James and his brother Tyrell used to run Harlem streets unexpectedly falling in love with Raielle, James and his brother decided to walk away from their life of crime, opening up their very own night club called Sky Cap in Manhattan; which will soon become hard when they find out their younger brother Lovell want to pick up where they left off. Breaking up is definitely hard to do Lanay and Christopher was together for years but balancing a relationship and being in the drug game is not a walk in the park. Lanay got tired of being number two to the game so the last time Chris had to make a run out of NYC at no notice was the nail in the coffin to their relationship. She’s now dating Stephan just as things are looking up for them Christopher is back home and ready to claim what he thinks is rightfully his. As they all geared towards promising futures their lives are simultaneously flipped upside down in a domino effect of havoc A Rayne Storm in London is filled with Drama Love and Betrayal leaving you wanting more.

Book Review
This was such a good story. I loved the plot, the characters, the conflict and the social topics raised. The way London was written I assumed she had multiple personalities and was blacking out, but no it was so much better than I thought. The author gave us an interesting plot sprinkled with subplots that were interesting as well. The pace was moderate and there was decent movement in the story.

However, I did not expect it to be such a difficult story to follow. I felt as if I possibly received an unedited version when it came to book one. No sentence was without an error of some kind.  I had to re-read A LOT to figure out what was going on and when I did I enjoyed it. The editing issues remained in book two, but on a slightly smaller scale.

As the subplots were left open-ended with no resolution, I am assuming there is a third book in the works and I look forward to reading it. Unfortunately, as it stands now, this was a good story ruined by a lack of editing. I think if these two books were pulled, edited to address formatting, transitions, sentence structure, and grammar then re-released, it would accurately reflect the author's creativity.