Author De'kari, a California native, first realized he wanted to be an author after taking a creative writing class in elementary school. He experienced hardships in his childhood that exposed him to abuse, neglect and witnessing violence first-hand.  The dysfunction led to him being shuttled between relatives and foster care. Later on, in his teens, the streets called and he answered. This not only led to bad choices but youth authority, jail and eventually prison. After experiencing the pain and darkness in his youth, “life” brought him back around to his love of writing. In order to indulge in his passion and act upon the inspiration life provides, he sets aside blocks of time to focus on his writing, which means you may also find him acting out parts to make sure he is giving the characters an authentic voice.
For De'Kari to provide an entertaining story, he keeps the plots interesting, the characters developed and the story full of action to keep readers on the edge of their seats. For stories like the Gorillaz in the Bay Series, which he began in 2007, it took him a few months to complete each. When the first book was published, the feeling of being able to complete a childhood dream was surreal for the troubled writer.  Even though he finds that writing sustainable characters can be difficult, he just finished up a new book called Dirt Bag, his favorite to date,  took him a few weeks to complete. He's written seven books so far and is diligently adding to his catalog.
When not writing he likes to write for other artists, draw, work out or visit with family and friends. In the past when time and circumstances allowed, he enjoyed participating in local volunteer programs.
De'Kari enjoys hearing from his readers and appreciates their constructive criticism, in an effort to help him grow.  He has learned to expect the unexpected in the literary game. If you haven't yet, please check out books 1 and 2 of Gorillaz in the Bay. The links below will lead you to my reviews of both books. 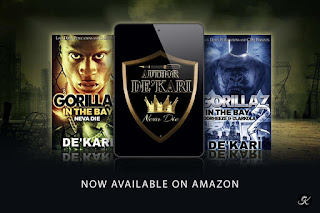