Under Her Wings Blog Tour & Giveaway! 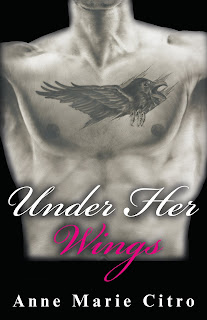 Wishing for death while living through hell, Gabriella is rescued off the rocks of a Scottish loch at the lowest moment of her life by the hot, humorous Edward and the sexy, staid Liam. The two men nurse the despondent woman back to health while teaching her how to pick up the pieces of her life. Both are captivated by her and vie for her attention.

Friendships are formed and secrets revealed. One man will become her lover, while the other becomes her best friend. Together, they have a past they cannot change, a present they must live through, and a future yet to be discovered. However, every time things appear to settle down for the trio, fate deals another blow, testing their trust and faith in each other and the love they have created.

Gabriella discovers the beauty of Scotland and life anew as she learns that trust is a two-way street that can either strengthen bonds or destroy relationships. Will she accept all that she learns or continue to believe she is betraying the memories she ran from?

Edward awoke to the sound of haunting sobs. A chill went up his spine. He couldn’t help thinking if there were such things as ghosts, that would definitely be the sound they would make. The sound triggered déjà vu in the recesses of his mind, and he searched his memory for something he couldn’t put his finger on.

I was born and raised in the Greater Toronto Area of Ontario, Canada. I grew up surrounded by a large, loving family, and I am married to a wonderfully patient man.

He is the love of my life.

We have four very cool sons that I love and adore! The girls they have brought into our family that have become daughters of my heart. I have also been blessed with a beautiful granddaughter, of course, after raising four boys...

I have my own personal gaggle of girlfriends, who enrich my life on a daily basis and make me laugh until I cry. Caesar Friday is my favorite day of the week; that's Caesars with the girls and date night with the hubby.

I love the arts and have tried my hand at painting, wood sculpting, chainsaw carving, wood burning, metal and wire sculptures. Yes, my husband is a very patient man! I am an avid reader, burning through about three books per week.

But nothing makes me happier than riding on the back of my husband's Harley and throwing my arms out and feeling the wind race by. We work very hard, so we can take a few weeks every year to travel to spectacular destinations around the world.

I worked with the most incredible group of special-needs teenagers, and they taught me how to appreciate life and see it through gentler eyes. My husband has encouraged me to follow my lifelong dream of being a writer. I've really fallen in love with the characters that take over my imagination and haunt my dreams.